I keep secrets the way you talk; non-stop 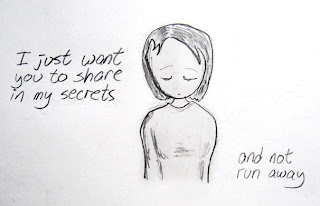 I’ve figured out some things in my quarter century of life here on Earth and one of those things is that people, no matter how close to you, can’t keep secrets. Even the ones that they say they won’t tell anyone will eventually tell…not on purpose or with any sort of malicious intent but just because the secrets that you want people to keep are more important to you than they are to your friends and, since they don’t regard them in a high enough manner, they in turn don’t remember that you asked them to keep it a secret. I’ve found that the best way to keep a secret is to not talk. Not not talk about the secret but just to limit your talking altogether. If you aren’t talking, it’s impossible to tell a secret because you aren’t able to. It’s impossible actually to tell someone something if you aren’t talking. No one would ever write down your secret on accident because then they would realize what they are doing.

I don't tell people secrets. I actually don't tell so many secrets that I forget some of the secrets that I was suppose to keep. People think that I tell a lot of people's business but if someone asks me to keep a secret I will never tell anyone.

Maybe though you're the type of person that's afraid to talk to people in general and I want to tell you that I'm not really talking to you. If you're the type of person that really can't hold a conversation with someone than I would say that that's something that you should work on. It's okay to have meaningless conversations with people in order to get to know someones likes and dislikes. I also want to say that just talking about stupid things in order to get to know someone can be a good thing.  Just know that I'm not talking to you in general if you're someone that is uncomfortable speaking in front of people.

So in order to not be a hypocrite, I’ll share something with you that I’d prefer not to.

I am afraid of getting married because my mom left my dad after 24 some odd years of marriage. (She would see it differently but I don’t, and I’ve told her so)  I haven’t been in a significant relationship since my mom left the house when I was 18. The relationship I was in fell apart because I was so demanding for love, that she stay and not leave me, that she left. It’s been 6 years since I’ve had a relationship. 6 years. 72 months.  2160 days. 51,840 hours. 3,110,400 minutes. 186,624,000 seconds.  18,662,400,000 milliseconds. I don’t know if there is anything smaller than a millisecond. But who cares you get the idea. It’s been a long time. And going on seven…an even longer time.  And I’ve had several amazing women come in my life that I should of dated but I drove them all away. Every single one of them. I don’t want to list them but it’s an amazing list of amazing women. Looking for love in all the right places…and then telling them to leave. Man, I should write a song.

My favorite verse of the Bible is Proverbs 17:28 which says “Even the foolish man, when he keeps quiet, is taken to be wise: when his lips are shut he is credited with good sense.”

This is crazy to me because so many times I feel I have to defend myself. With my friends, with my classmates, with my enemies, with everyone that isn’t hearing me right. It’s so hard defending oneself all the time.

All this is ironic because I received “most talkative” for my senior superlative. What an awful award. I went into the yearbook office and asked if I could receive another award that I got less votes for but still won…they said no but they would put something more friendly on it like “most likely to say hello.” They didn’t. And to this day I’m working on being more and more quiet. I’m also working on helping other people not talk so much.

One way of not speaking is to ask more questions. Instead of talking about your life to someone, try asking someone a question and when they answer ask a follow up one. And then keep asking questions. Don’t even give your advice. Just ask and ask and ask. It usually helps people a lot too. Other people have a lot to say that they have bottled up and no one is asking them the right questions or even questions at all…because people are too busy talking. Get out of your comfortable crappy box and get into someone else’s life in a raw real way. It will bless you. I promise.

Ephesians 25-32 Let no unwholesome word proceed from your mouth, but only such a word as is good for edification according to the need of the moment, that it may give grace to those who hear. And do not grieve the Holy Spirit."

Proverbs 10:19 When words are many, sin is not absent, but he who holds his tongue is wise.
Proverbs 12:16 A fool shows his annoyance at once, but a prudent man overlooks an insult. NIV

Proverbs 15:1 A gentle answer turns away wrath, but a harsh word stirs up anger.
Proverbs 16:32 Better a patient man than a warrior, a man who controls his temper than one who takes a city. NIV
*Proverbs 25:11 A word aptly spoken is like apples of gold in settings of silver. (so so legit a verse)

Proverbs 29:11 A fool gives full vent to his anger, but a wise man keeps himself under control.

I wish you the best. Love. War.