The World Could Use One Less Teacher: Me 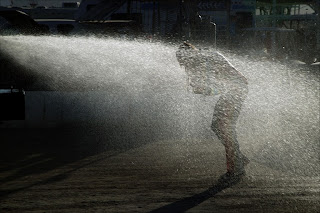 After joyously arriving in a Seoul, Korea a month ago, and now living here for a month, my eyes have been opened to an awful realization:
I don't like teaching English.
My new friend Joe told me that the problem with me is that I always think I'm right. And, while I love Joe and have only known him a few weeks, I can tell you that he is wrong in thinking that I think that I'm always right.
For instance, this afternoon I bought dish-washing soap at the local market and when I went home to wash my dishes I realized that the smell on the soap is an intoxicatingly disgusting mix of citrus fruit that apparently some Korean tycoon came up with to drive his wife out of the house.  So, instead of doing my dishes, I followed the magnate's orders. I closed the cap, packed my pockets full of useful gadgets, and cursed myself for making a wrong decision and headed out to the PC baung to write this entry.
Another wrong decision that I've made recently was getting on a plane and flying to Prague, then proceeding to Seoul to teach English to little Koreans. Sometime in the depressed 25 years of my life, I thought I'd enjoy teaching. And sometime else in my vain 25 years of living, I thought I'd enjoy teaching English. And yet sometime else in my glorious existence,  I thought I'd like teaching English to little Korean kids.
It's not the fact that all the kids can't say my name correctly and pronounce it Pagey (making me feel like less of a man every day).
It isn't having to teach 11 different classes every other day of the week. .
It isn't having a full time job,
It isn't the cameras in every room watching my every move.
It isn't my loving boss who told me yesterday that I have a bad memory, or my coworkers who I've been told I'm lucky to have.
It isn't even that I have to look at Asians 40 hours a week; which is actually a perk.
I just don't like teaching. (and I'm not that good at it)
I'm not complaining or whining or whimpering or whatever it is you think I'm doing. I'm not looking for condolences or patronages or pilgrimages or anything of the sort. I don't want your money or your sadness or your advice. Hell, I just thought you should know what's going on with me here in Korea.
So with 1 month down and 11 more months of this teaching thing left, I'm digging my trench and preparing for a long battle with stinking and trench foot.  I'm praying that somehow God shows me how to be a better teacher. I'm also praying that when I go home, my nostril palate will have grown to love the citrus hell flowing into my sink. If not, I'm going to be eating Ramin (not to be confused with Ramen) in some dirty bowls tonight.

"Do not let any unwholesome talk come out of your mouths, but only what is helpful for building others up according to their needs, that it may benefit those who listen." Ephesians 4:29


Things to think about:
-Koreans use umbrellas on the regular
-Wisdom can be learned
Things I'm reading:
-The Confederacy of Dunces
-The Unbearable Lightness of Being
-The book of I Corinthians
Things to listen to:
-Eric Kaufman music
Posted by Unknown at 11:39 PM 3 thoughts

Email ThisBlogThis!Share to TwitterShare to FacebookShare to Pinterest
Labels: I love teaching but I don't love teaching, It's like being sprayed in the face with water, teaching English isn't for me 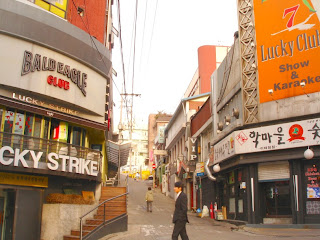 From my ten story apartment, I can see all of Seoul...well...at least the part of Seoul you can see from a ten story apartment facing one direction. The vast array of buildings lay beautifully thrown into a grotesque garden; each building a flower. The designer of the buildings, unlike the designer of flowers, had not beauty in mind but rather function when his erections were manifested. The function obviously people, the people obviously living. As I come to a close on the last inhale of my cigarette, I stare at all the lights, as my blind is unable to perform its job at keep out the blinking neon, like a security guard trying to contain a Bieber mob.
In the distance, red crosses held high up in the sky; like a pope holding the rosary high above his head demanding penance. These crosses, perhaps a banner for weary souls, signify the many 'Christian' churches laid out about the city.
I change posture at my desk in the dark, drinking lukewarm, unfiltered tap-water from my sink, connected to the unfiltered city water supply, that not even the Koreans drink. I'm not Korean. Ten stories below and 200 yards away I see a hungry, small, maneless lion prowling the allies looking for its pride; however, it hunts alone. Fighting to stay alive in a city that doesn't love it, care for it, or even see it.
My mind wanders like a vagabond to the lonely prostitutes giving hour after hour of unrequited sexual pleasure to the most needy of adulterous men leaving their wives who are fending for themselves, lonely at home, craving loyalty, looking after the kids that they both chose to bring into this polluted hell.
I'm blessed to not be a prostitute. In front of me lies the future dreamers of the Korean world. Behind me the grotesque actions of people taking after the buildings they live in. Where is the hope, I wonder. What do women hope in as they endlessly give their bodies and soul to the lustful cravings of impotent, adulterous men? How long does it take to realize that the hope you put in riches is empty, like the tomb Jesus was laid in?
Christianity calls for action and I, one of the soldiers in the war, am looking for the good fight. If you don't look at life as a war you're the person I'm fighting for.
From my limited, perched perspective, I still see all of Seoul. A tiny America struggling to keep its honor in the wake of MTV and the next generation. My belly is hungry for more food; a rumbling that Ramen noodles hasn't been able to quench. My clock reads 0152 hrs in the neon red that every person in the modern world has grown boringly accustomed to depending on.  I know not how and I know not when (At this late hour it's hard to think) but somehow I'm going to help the women that don't wish to be prostitutes come to a life of hope, not in money, but in the good news of the resurrection of Jesus Christ.
This Sunday I make my way to Hooker Hill. That's where they are. That's where I'm going to be.

On the eve of my first payday I'm excited at the prospect of being able to help people like I've never been able to before. love. war.

"In everything, therefore, treat people the same way you want them to treat you, because this summarizes the Law and the Prophets." Matthew 7:12


Things to think about:
-You believe in the emotional more than the spiritual
-Why does the White House look the same on two separate sides?
-If I love networking what is a job I can do?
Things to listen to:
-legit - B.O.B. I'll Be in the Sky
Posted by Unknown at 11:43 PM 1 thoughts

Email ThisBlogThis!Share to TwitterShare to FacebookShare to Pinterest
Labels: I'm a christian in Seoul, I'm looking for something to do in Seoul, My soul and my mind aren't the same, prostitution in Seoul

Its Walls Were Vast and Gorgeous but She Didn't Care 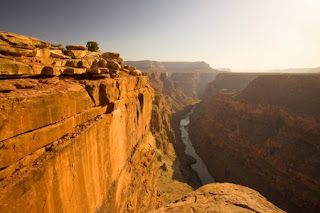 My father told me a story once. It involved him and my mom in their first few years of marriage. They were taking a road trip and my mom, raised a stick Mennonite, had an insatiable desire for books; she read and read. Even when they arrived at the Grand Canyon, my dad was out staring into the vast expanse of 2 billion year old (get real) Vishnu Schist rock, while my mom was sitting in the car reading a book.
Now, I can tell you that it wasn't due to my mom’s frequency to the Grand Canyon that dulled God's beauty for her, as if to say, “I know I've seen it a thousand times." (The feeling I got in Prague) But rather, from what I can gather, it was the beauty that my mom saw in the characters in her stories; whether they were love characters, hate characters, or somewhere-in-between characters.
He yelled "Birdie", a nickname for Roberta. (A name my mom would later loath, desiring to not sound so old and black) "get out of the car and come see this." As my mom did, begrudgingly or not I don’t know, she stood and looked for some seconds and said, "That's nice," as if she was merely looking at a boy giving up his chair for an older woman, or gazing at a child's picture placating then saying simply, "That's nice." She then turned and sat back in the car, back in her lee.
I feel like my mom right now. I lie in bed reading a captivating book while all of Seoul is laid out before me ready to be punctured by my personality. But yet I don't move and keep reading.
Have you ever heard the phrase..
"You don't change the culture, the culture changes you."
If I had to guess I would say my mom took that phrase and said something like...
"I don't care about the culture, I'll do what I like."
So today I make the same declaration. "It's not about culture, it's about who I am."
Koreans tell (not all of them) white lies. I tell the truth. Koreans think (not all of them) that if you have facial hair, you're dirty. I don't shave.
I can assure you that no matter where I live and for how long I live there, the culture won't change me and who I am. No matter where you go, being a Christian is being a Christian and culture has nothing to do with how you act. So please don't change who you are based on the people you're around. Unless they are helping you to become better. Cut the people out of your life that are encouraging you to be horrible. Keep the people in your life that need you to be strong for them.
until next time...
나는 당신을 사랑 당신을 다시보고 싶어서 기다릴 수 없습니다.
(I love you and can't wait to see you again.) war.

Things to listen to:
LIGHTS


Things to think about:
-You need a significant other to be complete.
-The Far Side is the best comic strip ever.

Email ThisBlogThis!Share to TwitterShare to FacebookShare to Pinterest
Labels: living in Seoul, My mom and my dad always get along, the Grand Canyon and all it's greatness