It’s a little strange to me all the people in the world. I know I’ve talked about it before but I can’t shake it out of my head. There is close to 7 billion people living right now in the world. About 20,000 died today and about 40,000 were born. Does that not rock your world?

We talked about stereotypes today in my Consumer Behavior class and my teacher spoke about how stereotypes were necessary in order for us to process information. This all ties in with my experiences today. I was in the student union and like most times I’m in the student union I decided to go and chat with the different tables that were set up by different clubs promoting their different causes. I walked up to a table surrounded by black people and started up a conversation about the club. The club was the BSA or Black Student Association and as I approached I tried to think to myself how I wanted the conversation to go and I thought that I’d like to talk about race and how the BSA’s title is racist. What I wanted to do was truly understand from a minority’s perspective why it is okay to have an organization titled the Black Student Association. One of the members main responses was, "Well we have white members in our club." Which obviously didn't sit well with me as a good reason. Their mission is copy and pasted here from their website:

“Our mission is to actively make a change for unity by encouraging the principles of scholarship, leadership, and cultural uplift. In addition, BSA is committed to promoting a positive image at Appalachian in the African American community at large.”

The first part of this mission statement doesn’t make sense because seeking unity by separating yourself into a club with the title “Black Student Association” is really the opposite of the goal. The real way to seek unity, if unity is what you’re after and if you think unity doesn’t exist, is to go to the clubs and organizations that exist and be a part of them. That is the real way to get unity. You should title the club, "People for the Equality of Black People." That'd be a club I could actually get behind.

Maybe it’s from my perspective but white people don’t view black people as lesser or unequal. Sure there are some racists out there and I give my two cents when I hear racist remarks but by and large whites think of blacks as equals. I mean goodness we elected a black president, we watch black athletes compete every night in every arena of sports, we watch black people give political commentary on our news networks, we’re friends with black people, we’re related to black people, and it’s a great thing.

And I argue all this to say that that none of this matters. Goodness gracious I just spent an hour talking about stuff that doesn’t matter. It doesn’t matter to God if you’re black or white or yellow or red. What matters is how you treat people. It doesn’t matter if you’re part of a group of people to promote your race because your race is going to pass away at the end of time and you’re going to have to account for your actions here on Earth. If you’re actions weren’t helping the widow, the orphan, the prisoner, or the stranger then your actions were in vain. If you’re fighting for freedom that’s amazing and I want to help you, but if you’re fighting for something other than that then refocus your efforts and do something worthwhile.

I’d like to say that white people and black people are as close to the actual colors of black and white as Jesse Jackson is to helping the civil rights movement today or as David Duke is to getting any respect from anyone I know…not even a little bit.

The key isn’t joining together with people that look like you but rather joining together with people that have the same purpose as you in order to fight side by side for something that matters. This happened in the civil rights movement and was an amazing thing but isn't necessary anymore. Now black people have equal rights and the ones that are focused on their skin color should focus on other things that are more important, like humanitarian efforts, or spreading love to people who need it. Because fighting for equality when you have equality isn’t time well spent and is looked on from the outside as useless.

I’m moving to Africa in three to six months where I’ll be a white minority. Now tell me how much sense it would make if when I got there I looked for all the white people that were there, made a club where we met once a week to talk about how white people could get more equality among our black African peers. It'd be stupid because that's not the reason for living. I’ll tell you what though it’d make a lot more sense doing it over in Africa, where there isn’t equality in most countries, than doing it in America where there is.

I write this merely to open up a dialogue and not to judge anyone. Jesus says not to judge...and so I don't judge.

-Ritz crackers are by far the best cracker that exists. White crackers are probably third on the list after club crackers (I couldn’t resist)

-Racial slurs are pretty fun to read about. http://www.rsdb.org/

-Night Over Water by Ken Follet
Posted by Unknown at 10:01 PM 0 thoughts

Email ThisBlogThis!Share to TwitterShare to FacebookShare to Pinterest
Labels: African Black, Jesus loves people despite of color, people who are racist, racism in colleges, The Black Student Association

There isn't anything better than helping people out of slavery...serious nothing. If you have any questions please email me at page.trimble@gmail.com

If you're interested in sponsoring me per mile please let me know how much per mile. The trip is around 3090 miles give or take a hundred miles. I'll be clocking the amount of miles on my bike. If you want to just donate God bless you. you can do that to the left right here in this blog. If you donate money directly to freepeoplefreepeople.com please mention Page bike trip somewhere in the memo line. Thanks so much. 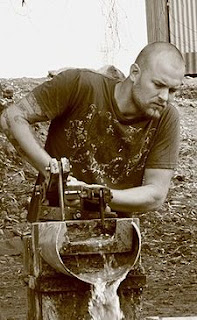 I sit in my room dreaming. Do you dream? I catch myself dreaming about being famous for doing good around the world. I stop myself every time this happens because it doesn’t matter, not doing good but being famous. For a long time, I’ve wanted to be famous. It’s an interesting thing to think about, fame. What is it like to be famous?
Yesterday and today on Facebook a lot of people replaced their profile picture with someone who is their doppelganger. Every single person’s doppelganger was a celebrity and famous and every single one looked better than the person that posted it.  In sheer Page fashion, I put up the best looking man in the world, Brad Pitt, in some sort of pathetic attempt to show people how stupid putting celebrity doppelgangers as your Facebook profile pic is. I don’t know if people thought I was serious or not. I guess if you thought I was serious than you don’t really know me…because 1) I don’t think I look like Brad Pitt or even a faint imagine of someone that looks like him, and 2) I don’t care about fads that are going on all around me. Fads I don’t care about include but are not limited to: Live Strong, Harry Potter, LilWayne, Twilight, liking celebrities, not going bald, Obama, and of course the biggest, Uggz.  There are some things that I do like that I don’t consider fads like Twitter or being a mountain man wearing plaid. The problem with fads though is that you don’t know that they are fads till they go away and I don’t see Twittin’ or looking like Mr. Bunyan going away any time soon.
I’d like to think about the reason that I don’t like the popular things. The main reason is because a lot of the things that are popular at any particular time are just stupid to me. For instance I don’t like the Live Strong movement because it’s so vain. Lance Armstrong thinks that the reason that he’s alive today and the reason that he is so good is that he has the ability to live...strong. First, he didn't chose to live. Second, how strong he is wasn't a product of himself. I mean where does he think that athleticism comes from, if not something besides him. Does he think that he created himself? Does he think it’s his living strong that has enabled him to be the great cyclist that he is? How vain do you have to be to think that you are the reason for everything you are? Does every rapper really think they are the greatest? What an empty life.
With all these fads going here and there, I’d like to offer something that is famous but isn’t a fad. Helping people. I saw a quote from Jesus today on Wine to Water’s site that said, “If anyone gives even a cup of cold water to one of these little ones because he is my disciple, I tell you the truth, he will certainly not lose his reward.” What is people’s main gripe against Jesus? I don’t understand. Life is about living for someone else and not yourself. True life is about making the things in your life that seem like they matter, secondary to the things that matter to other people. I think I spend on average 50% of my day doing things that I don’t necessarily want to do just to help people. How exhausting does it have to be to only think about yourself and what’s good for you all the time...I'm tired thinking about thinking about myself.
If you spent the entire rest of your life only serving other people what kind of legacy would you be leaving behind. It’d be a bigger legacy than Michael Jordan, Tiger Woods, and Wayne Newton combined…because the people that you would touch would actually have benefitted from you directly and saw the love that you had for them. The difference is that Jordan and Woods legacy is just based on how good they were at a game. And it wasn’t their love for the people around them that makes people connect with them, but rather their love for the game they play…a selfish thing in and of itself.  After thinking about what it would be like to be famous. Wouldn't you rather be Doc Hendley than T.I. or Mother Teresa than Maria Carey? I’d rather be no-name Page Trimble at the end of my life and have served humanity with everything I have, than all the celebrities that have ever existed, ever, in the entire world since the dawn of man who have lived for themselves. Why? Because God sees the things that you don't. love. war.
Things to think about:
-There are people that need your help.
-Jesus sees everything that happens, even if you don’t believe in him.
-not one person has ever done anything 100% alone, ever…not even Jesus.
-Jesus loves the person you are and wants you to progress to be something better than that.
-the smell of tuna doesn’t come off your hands unless you wash them.
Things to read:
Wine To Water
Posted by Unknown at 6:44 PM 0 thoughts