Politics ran through my veins like blood runs from noses 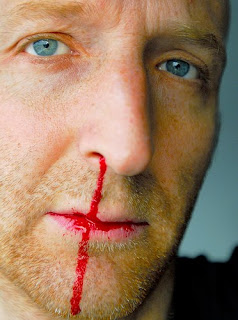 I used to follow politics more than anyone you know.  I watched the news every night, read large amounts of articles that were written about the very important, various happenings of that day, and was even a member of RUSH 24/7 where I downloaded all of Rush’s shows straight to my iTunes and listened to hours and hours of his wonderful show. I knew the Constitution, could name all the Supreme Court justices, knew almost every reporter on CNN and Foxnews and even yelled at the TV when people were saying things that disagreed with my views on politics and life. I did all this for my political talk show I had on my college radio station called Politics with Page. The show was one day a week for three hours. I had a lot of fun being on the radio, talking about politics, and listening to myself talk about politics. People would call the show every so often and we would discuss things from Newt Gingrich running for president, to George W. Bush’s decision to go to war, to Walter Williams’s discussion of economics in the US, hell I even threw in some Maddox. (crappy children’s art work is the best by far) I was so immersed in politics that I had an opinion on every issue; gay marriage, ungay marriage, illegal immigration, legal immigration, the death penalty, the life penalty, fishing licenses, NATO, NAFTA, the UN, the role of states in the Union, and the drudgereport.com (you didn’t think this could be an issue…but it was back in the day). It was only difficult for me on a few occasions to fill the three hours with my opinions.

I argued with my political science professor when he said things that were untrue and told my fellow students during class that they didn’t have to listen to the things that he was saying, to question everything they heard. I was wrong from time to time but I stood firm in my opinions. I called Senators and told them my thoughts. I discussed in great length politics with everyone I came in contact with, argued with the idiots, and learned from the brilliants. I went to Washington and visited my senator’s office in the capital building. I also took a tour of the pathetic, artsy, unused portion of that great building. I attempted, to no avail on two different occasions, to run for student body president.

Do I need to go on? I loved politics. The culmination of my love for politics and arguing happened last year in the ’08 to ’09 school year when I decided to put my money where my mouth was and actually get into politics in my school’s SGA. I entered with high hopes, discussed the different bills that were written by various senators, as stupid as they were, and actually cared a lot about what I was doing. I ended the year with a very huge sour taste in my mouth. The head of my committee stabbed his own committee in the back in his final speech before senate and took us all by surprise. I let him know in our last committee meeting of the year what I thought about his actions…in a very manly way.

I now don’t love politics. I actually don’t really watch the news any more than keeping up with what’s going on in the US and the world to be able to have conversations with people about current events. The conversations though usually made me want to jab forks in their eyes. I’m sick of the vanity of it all. I spent countless hours arguing with people about how their input mattered and that senators listened to them when they called but now I don’t spend seconds trying to convince people that they matter. They don’t. Or rather their ideas don’t. What we need is a revolution. A revolution with blood and guns and fighting and crying and hate and love and maybe even swords, and defiantly a purpose. We won’t have anything of that sort though because my peers are too passive. The men I know don’t fight anyone in real life but rather spend all their time fighting alongside the Master Chief as they defend Earth from the High Prophet of Regret. That’s Halo I, II, and III for all the ladies out there and the woman are too busy making sure all the men aren’t fighting. It’s really sick.

I used to be an idealist and I still am but every representative and senator would have to die in order for there to be any real progress to happen. My friends tell me that I need a revolution to fight and I would agree. But I couldn’t find more than 10 people that would be willing to fight one with me. Also, I’m all talk and so are you. Even if you and I wanted to start a revolution, we wouldn’t be able to because there in the near future, I believe, isn’t going to be anywhere to buy weapons. Of course if I was really planning a revolution I wouldn’t blog about it. The CIA and FBI have so close tabs on everything you write about you’d be stupid to ever try anything that goes against them. And there lies the problem. Get real. Love. War.

News articles to read that indirectly show the attitude of the people that are in power over us.