Sex in Hostels and Dancing in Clubs 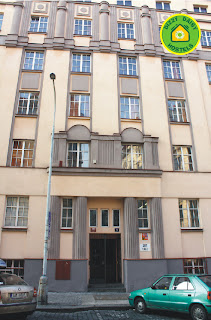 I’m laying on my bed in Prague at a hostel called Dizzy Daisy (picture provided). I’ve never stayed at a hostel before and if you haven’t either I can fill you in on what it’s like; a cheap hotel with roommates. They don’t provide soap or make your bed every day. One great thing though is the people that you meet.
A guy staying in a room here is a DJ at a strip club. We’ll call him Jazzy Jeff for the sake of privacy. He just came in my room and asked me if a certain song is a good song for the girls to dance to. I thought about it for a second and told him I don’t really know if I feel comfortable picking songs for your girls to dance to…but…that one sounds a little slow.

I’m not sure how fast or slow a strip song is supposed to sound so I make educated guesses from two separate things I’ve experienced: dancing, and taking off my clothes. He played another one and I thought it’d be too fast. Hell, I don’t know, do strippers like fast music or slow music? Jeff said they liked all different stuff. That makes sense I suppose. Despite the popular opinion, I guess all strippers aren’t alike.
We’ve talked a lot about God, focusing on his providence. He knows the Bible fairly well and I've enjoyed our discussions. He agrees that God doesn't like strippers stripping but said he's not going to do this job that long. I told him to quit.
I’ve also never understood why they use poles for stripping and no other types of dancing. Does anyone know the reason for this? I know in ballet they use sideways poles for practicing but I'm pretty sure that’s not the same thing.
I’ve changed rooms twice and I meet a guy and his friend. They were from Italy and apparently after getting back to the club at 3 in the morning he had time to score with an American.
Ciro: Sorry for waking you Page.
Page: nah man it’s all right. How was your night?
Ciro: We meet two girls from America. It was disbelievable.
Page: I’m not sure what you mean by that bro. Like unbelievable?
Ciro: um…like…she was easy.
Page: Did you have sex with her?
Ciro: yes
Page: uhh
Ciro: yeah it was a fun night.
Maybe he wasn’t talking about sex and something got lost in translation but sex is a pretty universal word and so is the word yes.  (Unlike the word 'is' which seems to have a lot of meanings. Thank you Bill Clinton).
Now I don’t consider myself sheltered in the least, but I couldn’t even begin to explain to you how to go to a club and pick up a girl and have sex with her…why…because I don’t do it. And we all know that practice makes perfect. One thing is for sure though that it’s crazy to me how ambivalent people are about sex. Isn’t it something important to give to someone that you know that you love and trust? Isn’t it something that should be used to consummate a marriage and save for your wife or husband?
What else is crazy to me is how sex is the pinnacle of everything in a man-woman relationship. Everyone is trying to achieve this one thing, for believers it’s on their wedding night and for non believers it’s every night…still it’s the apex of the physical relationships.
This sex craze makes sense to me though in that I’m 25, and still desiring to have sex with my wife. I know in time I’ll find her and we’ll live happily ever after. Until then tell me your perspective on sex. I’d love to hear it. Love. War.

Things to think about:
-How many people you know from foreign countries
-If every country has open borders are they really a country?

Things to watch:
Legit goals
The funniest Jesus videos you'll ever see The third one is the best...watch them all
Posted by Unknown at 5:59 PM

Email ThisBlogThis!Share to TwitterShare to FacebookShare to Pinterest
Labels: Living in hostels in Pragie, sex in the club with a random stranger, you should only have sex with your wife or husband