It's not the love complete but it's close

So here I am; in the middle of my third to last semester of college contemplating life like never before. It’s obvious to me some things about life that I’ve recently been thinking about. And the amount that I’ve grown in the past 2 years is rather scary to me and sometimes makes me want to cry…but not now. Saying that I’d like to address one of my more negative personality traits and would love to hear your thoughts on the matter.

Some of my friends have told me in the past that I do whatever I want and have no regard for anyone else. Valentina would say that “[I] think I own the world” but I would say that while that statement is hyperbole there is a part of her, and my friends, that think a part of it to be true; one of my friends in particular whom I think very highly of.

There have been two verses in the Bible that I have been mulling over in my head for the past year with profuse regularity: Proverbs 17:28 and Phillipians 2:3
The first reads “Even a fool, when he holds his peace, is counted wise: and he that shuts his lips is esteemed a man of understanding” and the ladder “Do nothing out of selfish ambition or vain conceit, but in humility consider others better than yourselves.”

The reason that these two verses are at the forefront of my mind is that they are the toughest for me to live out. My mouth and my pride. While I’m consistently and constantly working on these things there is one other thing that I struggle with that I’m writing about to you today, indifference. Now I know when you hear the word indifference you think of a lot of things and I would estimate to say that the indifference that I have is much different than the indifference that shrouds my peers. I am not indifferent to politics, thoughts, opinions, views, love, hate, or even people. What I am indifferent to is the thought that people have towards me. And even more stated the things that hold people inside their individual roles as good citizens doing what they think that they should do and not doing what they think they shouldn’t do. The question then is what is allowed and what isn’t allowed. Or even better what is good and what is bad.

So I’ve come up with an idea on what I think is good and bad in terms of what you should and shouldn’t do when interacting with others; in public and private. First I want to say that I do not think that something is bad because others don’t do it. I think that a reason a lot of people don’t do things is fear…pure unadulterated fear. Second, saying that I’d also like to say that this “problem” of indifference is tied into my pride, which I would say is ever lingering like the smell of a sock full of diarrhea in a place that you can’t find in your room. (But I’m searching for it like a madman armed with a spray bottle of bleach, some gasoline and a lighter..I’m a smoker (not habitual one)…and I’d burn down the house if necessary, and am) Third, I’m not going to tell you what I’ve come up with but would rather hear your thoughts on the matter. I’m very interested on what you think and I’m going to leave a few things Paul said that I want you to think about before you reply. If you don’t believe in the Bible or God please don’t comment on that because that’s not the issue here but rather what you think should be the governing factor on people’s actions.

Romans 13:1, "Everyone must submit himself to the governing authorities, for there is no authority except that which God has established. The authorities that exist have been established by God."
Romans 13:2 "Consequently, he who rebels against the authority is rebelling against what God has instituted, and those who do so will bring judgment on themselves."

Romans 13:5-7 “Therefore, it is necessary to submit to the authorities, not only because of possible punishment but also because of conscience. This is also why you pay taxes, for the authorities are God's servants, who give their full time to governing. Give everyone what you owe him: If you owe taxes, pay taxes; if revenue, then revenue; if respect, then respect; if honor, then honor.”

If respect, then respect! How legit is Paul right here acknowledging that sometimes things are owed to people that aren’t tangible. Respect and Honor. So legit.

I'm listening to "Love Complete" by the Epochs. If you know what this song is talking about please tell me. 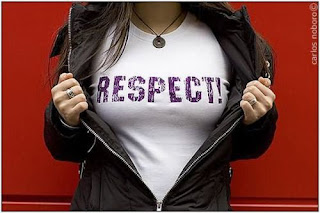 Respect on boobs. It doesn't get more respectful than that...I don't think.

Email ThisBlogThis!Share to TwitterShare to FacebookShare to Pinterest
Labels: boobs, dictator, love complete, own the worldm, respect, Romans, the epochs