It's Not the 'Twelve Step' but it's Close 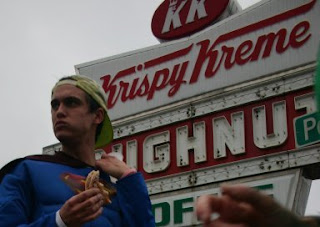 When I was younger, I had what some people like to call nervous energy.Sometimes, my parents would tell me to go run around the house...and I did, my little legs carrying me as fast as they could. I was as fast as a whip. In my 5th grade year, I held the record for the mile run: 6:19, if my memory serves. Not bad for a scrawny 10 year-old. Mr.Shawnburg said I tied two other guys but I was obviously way ahead of them. Is it really that hard to be a gym teacher?
Anyway, I have no idea where this energy came from. I mean, obviously it came from God, but I don't know why he so decided to bless me, of all people, with it. People ask me to not put my feet on their chairs because they get annoyed with the shaking. When people talk about being a night person or a day person, I tell them that I'm both...because I am. People even asked me if I had A.D.D. and I told them no, why? Did you eat paint chips when you were younger?

I've realized one amazing thing while teaching that has changed this once scrawny, now slightly bigger, guy’s life.  I acted the same, when I when I was younger as the kids that I don't like in class act, because they are so crazy, and have so much energy. (Granted a lot of the kids might get all their energy from sweets that their parents so ignorantly bestow into their little grubby fingers. My energy was much more pure and untainted, but still.)
Step one: Realize you were the problem.

Coming to the realization that I was such a problem to have in class I so decided to write the teachers who were bless enough to have me in the past and apologize to them for my behavior, or lack there of. The email went something to the effect of this:

I don't know if you remember me but I just wanted to write you a letter and tell you that I'm an English teacher now in Seoul and totally understand how hard it is to teach [Korean] kids who suck and don't behave, and wanted to apologize for my sucky behavior in your class. I regret it and I'm sorry. love. war.

This is just one of the replies that I've received back from one of my teachers, who for some reason has a disgustingly sick memory. My gut-busting, harassingly witty comments are in bold green.

"Page! Yes, I remember you, you were in my 10th grade English Honors (Honors...you know it) class in Mr. Sapp's room in the 600 building (WHAT!?!!?). I used to let you pace the back of the room so that you
would be moving and could concentrate. (I don't even remember this) You were doing t-shirts for awhile, I remember. (Not just tee-shirts Stephanie Wallace...clothing)


I am doing well...We are loving life! I am quite proud of you for what you are doing! I always told you that once you learned to focus that energy you would touch lives. (I'm not really touching anything) Congratulations! (This job was a piece of cake to get)


Step three: Pray your previous teachers that you can't get a hold of are retired.

The main teacher that I wanted to write an apology note to is named Mrs. Huffman. I talked as much as Malibu Barbie would, if she was alive, in that class. I couldn't find the Huff on my high school's website. I pray she's retired and not dead.


I think all 3 step programs, 12 step programs, any training programs, and all weight lose programs should always end with Krispy Kreme doughnuts. There's no better reward for the disciplined than hot and fresh! love. war.


p.s. The picture is my man Greg running the Kirspy Kreme challenge in Raleigh, NC.


Things to think about:

Email ThisBlogThis!Share to TwitterShare to FacebookShare to Pinterest
Labels: Teaching in Korea can suck, when you think you've figured it out, writing apology letters to people who matter